The circle that rises vertically, loops forever, without an end.
I have always been fascinated by repetition. Like most things in life, we continue to do the same things. These things seem similar but completely different.​​​​​​​
It can be three-dimensional or flat
I am fascinated by its properties
So launched the following exploration

Gödel Escher Bach by Douglas R. Hofstadter
A 1979 book <Gödel, Escher, Bach: An Eternal Golden Braid >by Douglas Hofstadter "the event was connected by walking, dreams represented the beginning and the end.  Bach created a rising cycle; It went back and forth finally became a strange circle, and eventually returned to the starting point like Escher created infinite staircase. “The tone is back to where it started, just like the facts in life, similar things are entirely different.
Also mentioned in Douglas R. Hofstadter’s book.-Canons: In a canon, a single theme is played against itself. In the basic canon, the first voice enters, and after a period, the second voice enters at the same beginning as the first, layering on top of each other.
Fugue: A fugue is like a canon, in that it’s based on one theme which gets played in different voices, but the notation is much less rigid and you can play with it more.
This is the first example in the book of a “Strange Loop,” a loop whereby moving through it we unexpectedly find ourselves right back where we started.
REFLECTION
A bestselling book for 40 years, the miracle of this book lies in its surprising connection between Bach's music, Escher's artwork and Gödel's mathematics, in addition to its profound meditation on human perception and creativity. Simultaneously, it discusses the prospects of computers and artificial intelligence that imitate human thoughts. Admittedly, it was not easy in some ways and ran to more than 800 pages. However, it made me think about the brain, the mind, and the intellect in a new way.
In the canon and fugue, mentioned by Hofstadter, he points out that Bach created a "rising canon" that ends and starts all over again so that it can continue to grow forever. "Strange Loop" is a cycle that makes us accidentally find ourselves back to where we started( Chapter xx,1979). It is like the infinite ladder in the famous Escher painting. The event was connected by walking. Dreams represented the beginning, and the end; as my subjects explore.You can see this sign in my painting projects.
Another example that I am interested in comes from Russell's Paradox: Most sets are not members of themselves. A complete system needs to be self-referenced, as the "production rules" of robots are mentioned in the Mu Puzzle (Chapter 1,1979).This rule is what I studied in another project.
[Hofstadter, D 1979, Gödel, Escher, Bach: an Eternal Golden Braid, Basic Books, US.]

Laresa  Kosloff
I can‘t do anything 2015
HD video with a duration of 1:56
By repeating a sentence repeatedly, I have a new sense of the sentence and at the same time increase the sense of helplessness
<http://www.laresakosloff.com/icantdoanything.html> 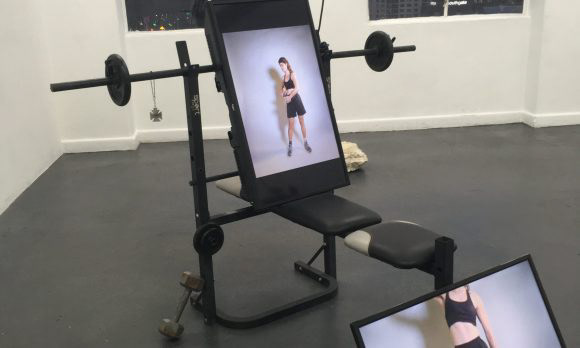 “gains”, “sets” and “reps” … (between body-building and body-language), 2018/19.
Isabella Hone
“gains”,” set” and” reps” is my most interesting work of her. Through ballet and body remodelling, we explore distraction and motivation, which include: comparison, consumption and capitalise forms. At the same time, this work also considers body deformation, concentration and worship.  This reminds me of the increasingly popular fitness trend in life, and people pay more and more attention to shaping the body- In a way to show off. There is no denying that fitness has many benefits, but it also creates a lot of pressure.  Does society imply what if a person does not manage his body well? Especially for women.  We can see photos or advertisements of almost perfect bodies on various promotional media. And they desperately target forms that most people cannot achieve. This is also correlated to the inspiration in my creation, whether we are also following an invisible rule.
In my previous works, I also explored the bondage of women in contemporary society.  They are obscure, invisible, but also fatal.At the same time, I am also thinking about how to express it more deeply.
https://bellahonesaunders.com/gains-sets-and-reps/

Long explains, "you could say that my work is ... a balance between the patterns of nature and formalism of human, abstract ideas of lines and circles. It is where my human characteristics meet the natural forces and patterns of the world, and that is really the kind of subject of my work."
From his words, I felt a resonance. In my work, I have also been looking for this balance.  The lines and circles are the best expressions I have found so far.
[Tate. "'South Bank Circle', Richard Long, 1991". Tate. Retrieved 25 November2019.]

Amendments. Water-colour on paper, balsa tray, each 180 x 140 x 3cm
GREG CREEK
The materiality of the drawing and sense of performance is heightened by the play of gravity and drip trails.There is both a pure optical beauty and a strong material presence in these works.
the titles, First Amendment, Second Amendment and so on suggest a political reference to the subtle alteration or decay of an ideal.
As I said, I am fascinated by the eternity, self, repetition, and infinity represented by the circle.
https://www.gregcreek.net/#/amendments/

A musical score is a form of translation.It transcribes sound into drawing, by representing the aural complexities of pitch, rhythm and tempo as visual symbols.
The Score expanded upon this spirit of transformation to ask, if music can be represented by notes on a staff, why not by colours?
Roy de Maistre “colour in relation to painting”
Ludwig Hirschfeld-Mack “Music colour theory”
In this group exhibition, from the medieval manuscripts to the 1960s graphic symbols, artworks and performances are brought together to form a whole, including music and dance. The content of the exhibition mainly revolves around music scores and uses them as a form of translation. They expanded the possibility of including pitch, rhythm and tempo into visual symbols. For example, the abstract painters Roy de Maister and Ludwig Hirschfeld-Mack's colour music theory is a supplement to John Nixon's work(Doughty 2017). They complement each other, which is what fascinates me. All the conceptual shifts and visual metaphors of the gallery serve as a tool to combine different artists to form a harmonious musical score.
Additionally, the performance artworks of Yuki Kihara, Christine Sun Kim and Thomas Mader have explored the potential of gesture communication. Among them, Christine's iconic symbols and gestures are related to my interest. The status of gestures and semiotics in contemporary art should not be underestimated.  But how to let the viewer experience? how to do art better?
And how to use code in art.  All triggered my new concerns.
[Doughty, J 2017, The Score, exhibition, 1 August - 05 November, Potter Museum of Art, Melbourne.]
How We Do Art Now

John Baldessari – The Pencil Story (1972–3)
[Colour photographs, with coloured pencil, mounted on board]
Baldessari gives the viewer all the visual clues to read this as a quick sketchbook-style page, creating a very authentic story, the story ending “I'M NOT SURE, BUT I THINK THIS HAS SOMETHING TO DO WITH ART” further suggesting to the viewer that this wasn't intended as a finished work of art to be viewed in a gallery.
This piece literally questions itself and creates an interesting parallel to the ideas behind the ‘readymade’ and the authority of the ‘artist’ and the gallery.
I don't remember when I started that I am no longer satisfied with the form of painting.
Painting can be one of the ways of expression, but it should not be the only way.
Expression and translation of emotions are also very critical issues
so
what about TRANSLATION
<Traces, Signs, and Symptoms of the Untranslatable>
MaríaIñigoClavo
1.There is no word in the Mayan languages to signify “art”. Translation is a faulty tool for subordinating epistemological frames, but can there be any coexistence without an attempt at translation?
2.Translation as Method: translation is knowledge and knowledge is translation.
3. In their translations of art referenced throughout this text—as “knowledge-wisdom-understanding” or a sacred sense of feeling and respect—it becomes evident that different cultures locate their experience of spirituality within the artwork itself.
[https://www.e-flux.com/journal/108/325859/traces-signs-and-symptoms-of-the-untranslatable/]
↑Back to Top